Throughout the 40 Days of Lent, our Words from the Servants podcast will feature brothers from around the world as they give daily commentary on the books of Exodus and Hebrews. Today, our Filipino brother Abyong Calo provides commentary on Exodus 16:1-18, 35. Take a listen below or click here to download. You can find the full list of our meditation passages for this 40 Days here.

They set out from Elim, and all the congregation of the people of Israel came to the wilderness of Sin, which is between Elim and Sinai, on the fifteenth day of the second month after they had departed from the land of Egypt. And the whole congregation of the people of Israel murmured against Moses and Aaron in the wilderness, and said to them, “Would that we had died by the hand of the LORD in the land of Egypt, when we sat by the fleshpots and ate bread to the full; for you have brought us out into this wilderness to kill this whole assembly with hunger.”

Then the LORD said to Moses, “Behold, I will rain bread from heaven for you; and the people shall go out and gather a day’s portion every day, that I may prove them, whether they will walk in my law or not. On the sixth day, when they prepare what they bring in, it will be twice as much as they gather daily.” So Moses and Aaron said to all the people of Israel, “At evening you shall know that it was the LORD who brought you out of the land of Egypt, and in the morning you shall see the glory of the LORD, because he has heard your murmurings against the LORD. For what are we, that you murmur against us?” And Moses said, “When the LORD gives you in the evening flesh to eat and in the morning bread to the full, because the LORD has heard your murmurings which you murmur against him — what are we? Your murmurings are not against us but against the LORD.”

In the evening quails came up and covered the camp; and in the morning dew lay round about the camp. And when the dew had gone up, there was on the face of the wilderness a fine, flake-like thing, fine as hoarfrost on the ground. When the people of Israel saw it, they said to one another, “What is it?” For they did not know what it was. And Moses said to them, “It is the bread which the LORD has given you to eat. This is what the LORD has commanded: ‘Gather of it, every man of you, as much as he can eat; you shall take an omer apiece, according to the number of the persons whom each of you has in his tent.'” And the people of Israel did so; they gathered, some more, some less. But when they measured it with an omer, he that gathered much had nothing over, and he that gathered little had no lack; each gathered according to what he could eat. 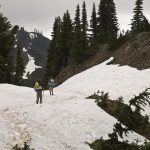