Tom Bergler is professor of Ministry and Missions at Huntington University, Indiana. He is married to Sarah and has two children, Ben who is four and Anna who is six. He holds a Master’s degree in Theology and Church History from Wheaton College and a PhD in American Religious History from Notre Dame University. But before Tom embarked upon his academic career (and family life) he was involved with the Servants of the Word for ten years. We interviewed him in his office to find out his thoughts about his time with the brotherhood.

“I was studying chemistry and history at the University of Michigan. I was a serious Christian at the time and was quickly attracted to some of the brothers I met in their student outreach (UCO). They followed the Lord in a way I always aspired to, but found difficult to do!” Pretty soon Tom was part and parcel of the student group, going to morning prayer at a brothers’ house near campus, spending Saturday nights with them and eventually living with them for the summer. “There was a great desire among us students to give your lives more fully to God, and I also wanted to do that. So when the brothers saw that inclination in me, they invited me to become an affiliate.”

As soon as Tom graduated, he began working for UCO and living with the brothers. After two years in Ann Arbor he spent a year in London before coming back and serving in UCO at Michigan State University. “In 1993 I was coming up to my lifelong commitment, and I somewhat surprisingly heard the Lord say that this was not my path. So that is when I decided to get married.” But he does not consider his years with the brothers a waste of time. “Not at all—that was God’s greatest gift to me and one of the highlights of my life. The years with the brothers made me the man I am today.” He points to the closeness of relationships, the sense of being a “band of brothers.” to sharing life and mission fully. “You are close enough to clash but also close enough to really support and challenge one another. I still dream of my time in brotherhood households. I loved it!

Tom remembers being given feedback about the way he handled himself on a particular occasion, a very typical experience for men in training: “Very rarely do people care enough to get into your life in that way, addressing your shortcomings. Yet that is what changes you and builds character. The fact that I am a man who prays and reads the Scripture daily and who connects with God reliably, all that I learned living with you men.”

As an intellectual Tom also appreciates the theological and spiritual foundations that were laid while he was in formation: how to think about worship, work, service, the church, all those topics were learned during his time with the brothers. “Every day of my life, I do or say or think something that I first did, said or thought when I was in the S/W.”

Becoming the Man You Are Meant to BeNews 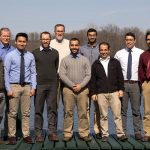 At the Heart of Our Life: The International Formation HouseNews